Sofia, Bulgaria – On the eve of the second Audi FIS Alpine Ski World Cup start of the season in Bansko, Bulgaria this weekend citizen groups and NGOs are concerned that the operator of Bansko Ski Zone has persistently violated Bulgarian and international environmental legislation and FIS regulations. With close to 40% of the ski runs in Bansko being illegally built and operated, many fear this event has cast a shadow over FIS reputation. In 2011, Bulgaria’s Minister of Environment and Water Nona Karadzhova admitted that the operator of Bansko Ski Zone Yulen JSC was using a territory larger – by about 65 ha - than the one designated by the concession of Bansko Ski Zone.
The ski run on which the FIS Alpine Ski World Cup is being held this weekend is also built in breach of concession regulations.
Bansko Ski Zone is located within the boundaries of Pirin National Park, which is a UNESCO World Heritage Site, EU Natura 2000 site as well as a protected area category II of IUCN.

The concession contract for the ski zone in Pirin National Park was signed in 2001 and awarded Yulen JSC concession right over 99.5 ha of exclusive state land. The company’s major shareholders are two offshore companies and Bansko municipality.

However, the breach of environmental legislation committed in Bansko Ski Zone is not only a national problem, but also goes against a number of International acts and FIS documents. The FIS Competition Rules Book IV - Joint Regulations for Alpine Skiing, 650.6.1.1 states that “The applicant is responsible for the observance of applicable environmental regulations during development of the course including completion of any improvements required by the inspector.”

Environmentalists in Bulgaria firmly believe that Bansko Ski Zone does not meet this requirement and should not have been awarded the Audi FIS Alpine Ski World Cup.

The President of the Bulgarian Ski Federation, Mr. Tseko Minev is believed to have control over Yulen JSC and Vitosha Ski JSC (operator of the ski lifts in Vitosha Natural Park next to capital Sofia). Through the bank he owns - First Investment Bank - he has extended loans to both companies. Vitosha Ski JSC did not open for business this ski season in an attempt to blackmail the Parliament to pass an amendment to the Forest Act in favour of the two ski resorts. The amendment is expected to be passed by the Bulgarian Parliament shortly despite NGOs calling on the Bulgarian government to halt the harmful amendments.

This month the Bulgarian Public Financial Inspection Agency issued seven administrative-penal acts against Mr. Minev for illegally spending government funds and the matter will be reviewed by the public prosecutor. After reviewing the government backed “Learn to ski” program for ski sports among kids, the state agency established that Mr. Minev through BFSki gave a quarter of a million Euro to a company, managed by his wife. Another beneficiary of those funds was the deputy head of the Bulgarian Ski Federation, Mr. Georgi Bobev, also head of the Vitosha Ski JSC.

Bulgarian environmentalists fear that 4 million EUR for organizing the current and past Audi World Cup events in Bansko on the 18-19th and 25-26th of February 2012 were used in a similar way with Minev’s wife company participating in all of them.

The companies mentioned above are linked to Mr. Tseko Minev and are investigated by national as well as by European institutions for receiving illegal state aid in the form of state subsidies in violation of the Bulgarian State Aid Law and the Law on Public Procurement. 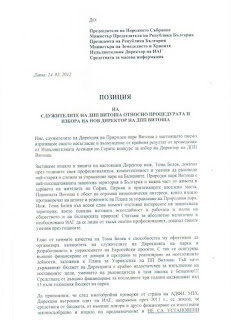 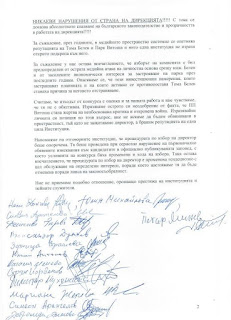